The history of Fortuin

From bakers and confectioners to peppermint experts. At Fortuin, we are always developing ourselves. It all started with Willem Hendriks Fortuin, in 1842.

Fortuin was founded in Lemmer in the province Friesland by Willem Hendrik Fortuin in 1842. Not long after, the confectioner moved to the city of Dokkum, which is still the home base of the company today.

Since the foundation of the company, the number of customers has increased significantly, and the sales territory has grown from regional to national to global. This growth came with a shift from manual to machine-driven production, and still we are always looking for innovative solutions to optimize processes and keep surprising the customers with our sweets and mints.

Growth and progress are still priorities at Fortuin, just like reliability and quality.

A few highlights from the rich history of Fortuin

1842
Willem Hendriks Fortuin starts working as a baker and confectioner in Dokkum.

1883
After the death of his father, Gurbe Jan Fortuin takes over the business. He introduces steam engines, and he is very proud that he is keeping up with modern times, which shows in this letterhead.

1888
Over the years, the company from Friesland becomes a luxury confectionery producer, and in 1888 they take the step to become a confectionery factory. They start making many classics, including the famous fruity hearts, icey bites, salty liquorice pastilles, and the showstopper Wilhelmina peppermint.

1892
It is the anniversary of the company, and Gurbe Jan Fortuin asks Queen Wilhelmina (12 years old at the time) if he can name his new peppermint after her in celebration of her birthday. Her mother – Queen Regent Emma – replies that she leaves it up to him. Remarkable fact: her letter has a black border, because her husband, Wilhelmina’s father King Willem III, passed away in 1890.

1942
The centenary of NV Suikerwerkenfabriek v/h Fa. W.H. Fortuin is in the middle of World War II. There is no cause for celebration, but the company thanks their customers for their loyalty and trust.

1965
Collecting pins is a big trend, and Fortuin cannot remain behind. With every bag of icey bites of 69 cents, customers in 1965 receive a beautiful pin.

1969
Queen Juliana is in the north of the Netherlands for the sealing of the Lauwerszee. For the occasion, she is presented with “a beautiful package of products”.

1976
When the first pile is driven for the construction of the new location at Fortuinweg 2, every employee gets a turn with the piling hammer.

2010
The launch of Fortuin ZwartWit is so successful that Fortuin wins a wheel of retail in 2010.

The most famous peppermints in the Netherlands get an upgraded look.2018
Nederlands meest bekende pepermuntje krijgt een volledig nieuwe uitstraling.

2020
We are always developing ourselves. Our products, but also when it comes to sustainability. Since 2020, we have been using paper packaging more and more often. For example for the Wilhelmina single packs, saving no less than 14,512 kg of plastic per year!

We started in 1842 and we are still growing every day. We are constantly innovating and looking for better flavour and product combinations. 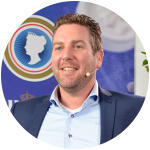 Want to develop your own candy?

Contactpagina of Discover the possibilities